by Drew Martin
I recently watched Aronofsky’s The Black Swan, a title often said in the same breath as The Red Shoes. The 1948 classic references the Hans Christian Andersen’s tale about a proud girl whose flashy shoes make her uncontrollably dance. She cannot stop them and goes so far as to have her feet chopped off by an executioner. Her amputated feet keep dancing, however, and her only escape from them is when she ascends to heaven. The Red Shoes film is entirely about ballet whereas The Black Swan superficially uses dance to stage a coming-of-age drama. I asked a colleague who was a professional dancer in his youth what he thought of The Black Swan. He replied: “First and foremost it was a horror film, coincidentally about dance. It could have been about any crazy girl.”


While The Red Shoes is an obvious source of The Black Swan, what came to mind when I was watching the latter was the 1929 short film Un Chien Andalou by Buñuel and Dalí, and The Glass Menagerie by Tennessee Williams. Un Chien Andalou has many moments that reverberate through the 83 years of film that follow it, such as the slamming of a pursuing aggressor’s hand in a door frame. While that too is played out again in The Black Swan, what I found particularly deliberate were the totally focused, gross-out body scenes. In the beginning of Un Chien Andalou, a man slices open the eye of a woman (it is actually a calf’s eye). In another scene, ants crawl out of a hole in his palm (a theme Dalí repeats in his paintings, which alludes to the decomposed state in which he found his boyhood pet bat). In The Black Swan, Nina (Natalie Portman) scratches and pokes at herself, opening up sores. She pulls a tag of loose skin above her finger nail up to her knuckle, plucks a black feather from her shoulder and stabs herself with a shard of mirror, creating a blood-soaked (and very yonic) orifice in her abdomen. These shock-accents are also the film’s greatest weakness. To make a coming-of-age film about a young woman and to use the menstrual and first-act blood of womanhood is not only a little too obvious but also sullies its nature. The comparison to The Glass Menagerie is because of the oppressive mother in a fatherless household and the general raw-American-neurosis, which the play captures so well. It is a much more dimensional study of the confines of a broken home. Unfortunately, the characters in The Black Swan are flat. What I prefer most about Menagerie’s approach is the use of glass to symbolize the special fragility of becoming a young adult.


I rented The Black Swan from a local library, watched the 1973 televised production of The Glass Menagerie with Katharine Hepburn on Netflix and saw Un Chien Andalou and The Red Shoes on YouTube. 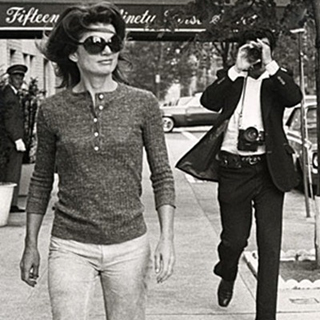 by Drew Martin
Smash His Camera is a must-see documentary for anyone interested in photography, celebrity, first amendment rights and another quirky character from New Jersey. (Click here to watch the trailer). Ron Galella is the despised and admired focus of this film. Robert Ebert says of him..."He is a viper, a parasite, a stalker, a vermin. He is also, I have decided, a national treasure."

The term paparazzi originated from Fellini's La Dolce Vita, with the news photographer character, Paparazzo, which means an annoying "mosquito." Galella is certainly annoying. He stalked Jackie Onassis. She sued him and won. He crept on Marlon Brando, who reacted by knocking out five of his teeth.

Galella lives in a Sapronos-like house in Montville, New Jersey. His basement is full, and very well organized, of thousands of pictures of celebrities, which he sells to newspapers and galleries. Despite a parade of negative testimonies in the film, it is hard not to like this dedicated, driven creature who spent his career showing people how they really are and not as they want to be seen. 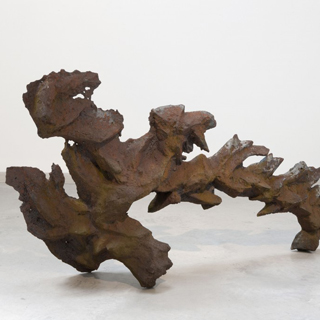 by Drew Martin
Three of Bill Bollinger's raw, cast-iron sculptures were recently on display at Algus Greenspon in the West Village. Another venue for his retrospective is the Sculpture Center in Long Island City, which is showing his work until the end of July. The Greenspon show of Bollinger's work, entitled Aluminum channel, cast iron, paper: 1966-1977, had a variety of his work but the cast-iron pieces dominated the space. They are solid, free-form works, which he made in reaction to the emptiness of conceptual art as well as to large-scale bronze sculptures that assume mass but are actually thin, empty shells. Art holds the process of its creation and what is reiterated by this work is the red-hot pouring of molten iron into loose sand molds, the long cooling period and the final tilt-up grunt of the artist to see what he has formed. They are deliberate and accidental, with a feeling of experimentation. There is a sense of pre-purpose, like they are the work of early humans refining methods that will evolutionarily lead to a terra-dynamic plow, a battle sword, a structural steel beam, a chassis of a car, or even...one day...an envisioned sculpture that will conjure these thoughts. 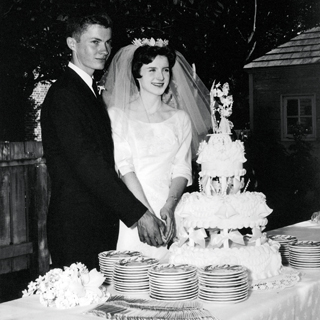 My parents just celebrated their fiftieth wedding anniversary. It is a remarkable achievement; a stretch of time longer than some lifespans, careers and even whole eras such as communism in Eastern Europe. When I was getting a gift for my parents, the lady assisting me said she just celebrated her fifty-fifth wedding anniversary and some of her friends and relatives recently celebrated their fiftieth wedding anniversaries. I asked her what the trick was and she said, "Staying out of each other's way." I thought perhaps this Yankee cynicism might actually be the secret ingredient to a sustained marriage but what I realized on Sunday at my parents' celebratory luncheon was that it was quite the opposite. My brother gave a lovely speech and my mother worked the room but it was my father's heart-felt speech that touched me the most, as he spoke of my mother as his best friend and how she opened him up to the world of traveling, language and the arts. My parents live ten miles from me but we drove four hundred miles to the event that took place at the Williamsburg Inn in historic Williamsburg, Virginia, where they met, married and first lived together. The trip to Virginia is a painfully long drive but feels instinctual, like the migration of birds. If my parents' fifty years of marriage played out with a linear narrative of film or a novel, the celebration, like any reflective event, was like a big canvas; a mural of their life, which the kind words of the speeches and the presence of friends and relatives flattened in that moment to be viewed in totality. 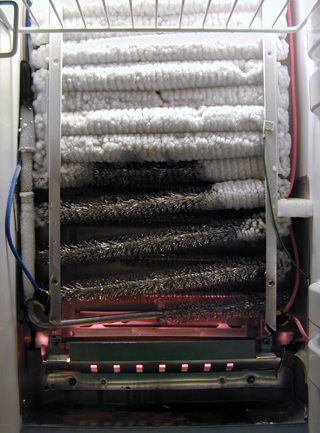 As a kid, I learned from a CHiPs episode that refrigerators are dangerous because you can get trapped in them, but I did not know how fiery they are. Do you know how a self-defrosting fridge works? Every six to eight hours an electric heater under the freezer coils blasts the icy mass with extreme heat. Pictured here is the inside of my own freezer going through the cycle. The photo with the grid is a picture of the heater coil in a glass tube. It is amazing to witness the defrost because it is like some kind of Icelandic paradox of volcanic fissures in a frozen landscape. This cycle happens behind a metal panel in the back of the freezer. The temperature in the freezer may jump up 20 degrees Fahrenheit, which is why the typical setting for the freezer/refrigerator is 0/37 (degrees Fahrenheit, respectively). I would think we could have a better system considering all of our technological advances. This apparatus has been consuming my thoughts since my refrigerator broke down a couple weeks ago. An instructional YouTube video on the subject guided me away from having my own meltdown. After watching the video a couple times, I pulled the big refrigerator out from the alcove in the wall, took out all the food and beverages, then defrosted it. Later that day I was back in business and was relieved when the temperature sank to 0/37. But two weeks later, as I had read it might, the shutdown occurred again. I knew it meant the heating coil was not working so I defrosted the refrigerator again and tried to pull out the coil but it would not unclip. With the refrigerator unplugged, I cut the insulated copper wires that feed it and removed the glass-encased coil. The coil had burned out, much like a spent light bulb. I snipped off the burned-out section and twisted together the thin coil wires. I put the heating unit back in and joined the copper wires. The freezer unit quickly frosted up like wintry pine trees and I got quite worried, but the heating unit eventually kicked in and melted away the ice. What I found most interesting was how the heater coil works. Electricity flows really well through copper. Copper is extremely conductive. The thinner wire in the heater coil is Nichrome (80% Nickel and 20% Chrome), which not as conductive but lets electricity pass with great resistance, which is converted into heat. The heater coil in the refrigerator is not unlike the coils in toasters and space heaters, which are like really inefficient light bulbs. The difference is that light bulbs use an even thinner wire made of tungsten, which has even greater resistance. Tungsten completely burns up at high temperatures in the presence of oxygen, which is why it is encased in a bulb that is filled with an inert gas or is evacuated. 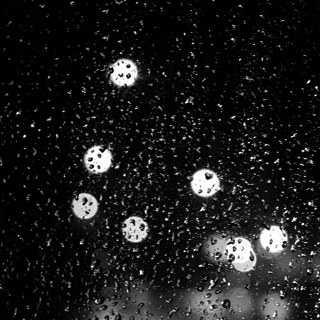 It rained hard through the night.
If it rains hard in the day, there is a sense of power and exhibitionism.
But rain at night belongs to night things, like thieves and raccoons, grogginess and hidden passions.
It does unseen things and is reckless, like a pack of young, drunk men.
And it mixes with your dreams.
You fall asleep to it, wake up to it, and then fall back asleep to its impact, like millions of tiny meteorites.
When you wake up to the silvery light of the cloudy morning, and everything is green and wet, there is a strange silence despite the lively clicks and chirps of sparrows.
Newer Posts Older Posts Home
Subscribe to: Posts (Atom)