The Art of Jobs 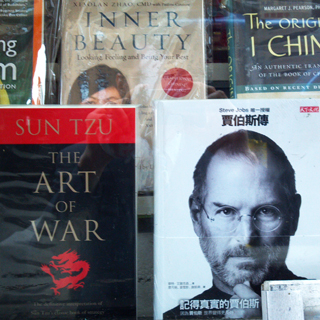 by Drew Martin
I took this picture of a New York Chinatown storefront last year, which had a Chinese version of Steve Jobs by Walter Isaacson next to the Art of War. I finished reading Steve Jobs last week, ironically on an old Kindle. It was my first read on a Kindle. I thought I would hate the experience but I love the screen, which only gets clearer in sunlight (as opposed to the glare of an iPad), and I found it more enticing to pick up and read here and there than a hard copy. Isaacson is particularly good at writing about the relationships people had to Jobs in this warts-and-all biography. I finished it with a new found respect for the prickly, but driven character of a visionary who earned a place in history next to Henry Ford and Thomas Edison. What I learned most from the book, is how the quality of the Apple product (while Jobs was running the show) came before everything else. If there is a flaw to the book it is that Isaacson brings you into what he often references as Jobs's reality distortion field, which leaves you marveling at everything he pulled off without really questioning the deeper meaning and long-term affects of Apple's push to dominate so many markets and industries. I did appreciate Isaacson's candid explanation of Jobs's dependence on Bill Gates at several times in his career, and how certain marketing ideas, which we associate with his brilliance, were really something he actually objected. These included his insistence on wanting their groundbreaking computer to be called the Bicycle, instead of what won out, the Macinotsh, and his initial dislike of the famous iPod dancing silhouettes, which Lee Clow of the advertising agency TBWA\Chiat\Day stood firm to keep. Clow was also the man behind the famous 1984 Superbowl commercial for the Macintosh.

She's an Upton Girl Living in a Lonely World 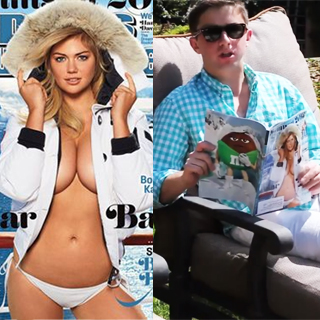 by Drew Martin
When Jake Davidson, a 17-year-old kid from Los Angeles, asked supermodel Kate Upton to be his date to his senior prom this year, the video he made for the proposal went viral. The story got picked up by the press, which tried to make it happen. Upton could not swing it so Nina Agdal ("Rookie of the Year" from the 2012 Sports Illustrated Swimsuit Issue) stepped up to the plate. Agdal, a Dane, not only made Davidson's prom fantastisk but she got to experience this American rite of passage. Davidson's video nods to The Graduate and Ferris Bueller's Day Off and it starts with the stereotypical unlikely boy gets girl plot and lets the fate of social media complete it. It's funny, especially the line "I'm ... 5'9" on a really good day." He admits he cannot dance and then says that her Cat Daddy video should have won an Oscar for Best Short Film. In the video Upton dances to Cat Daddy by Rej3ctz in a string bikini at a Terry Richardson photo shoot.

by Drew Martin
When I was younger, I understood human evolution as an enlightened selection process that intelligently separated us from our ape ancestry, but more recently I have been thinking about it as a random offshoot due to abnormal brain deviations, around which our race jerry-rigged societies.

I usually find something redeeming in every movie I endure, but two films I watched during the past week left me questioning the advance of civilization. Last week I watched Meet the Fokkens, about twin sisters who worked as prostitutes in Amsterdam's Red Light district into their senior years. Although they were smart enough to shake their pimps, run their own business, and set up a trade union for their profession, I felt like I was watching two creatures bumble about their zoo enclosure for the whole movie. That being said, the film climaxes in a joyful art opening of their paintings.

Today I watched The Woman Who Wasn't There, which is an unbelievably bizarre documentary about Tania Head (actually Alicia Esteve) who had the most dramatic 9/11 survivor story: she escaped the burning aftermath from the impact of the second plane to strike the World Trade Center, nearly had her arm amputated, and lost her newlywed husband in the first tower that was hit. But, she made it all up. Hailing from Barcelona, she was actually in Spain on that dreadful day and had no relations to any of the victims.

To get the bad taste out of my mouth, I watched Tom Papa - Live from New York, which was thoroughly entertaining and has restored my faith in humanity. I went to high school with Tom and knew he had become a successful comedian but never watched any of his performances.

Click here to watch the trailer for Meet the Fokkens.

Click here to watch the trailer for The Woman Who Wasn't There.

by Drew Martin
Today is Keith Haring's birthday. He was born 55 years ago but died when he was 31.

Simply put, Haring was the one of the most prolific and fluid artists of all time. He could paint the side of a building in a day, and did a series of murals around the world. He even painted a blimp. Most importantly, Haring probably had the biggest heart of any artist. He loved kids and did many community-based art projects. He saw his radiant baby as the symbol of humanity, reasoning - why would we invest so much in a mouse (Mickey) when there is nothing as special as a newborn.

I finished reading his diary, Keith Haring Journals, three days ago. The first entry is April 29, 1977 in Pittsburgh. The last entry is September 22, 1989, from Italy. Haring died almost five months later, February 16, 1990, because of AIDS.


Haring's Journals never waver from his intense interest in and through knowledge of art. A continued thought is that he is happiest when he is working, not in a workaholic way, but because that is when he was most alive.

Haring was a good friend of Andy Warhol, and in his mind, he was the next step because Warhol brought pop into the artworld, while Haring brought the artworld into pop. The truth is, he was the first artist to make art a real language, comparable to hieroglyphics and pictographs. His work was informed by these visual linguistic predecessors, and was influenced by Morse code, which was a hobby of his father, along with drawing cartoons.

Unfortunately, despite all his successes in his brief lifetime, Haring was often given the cold shoulder from the art establishment and was too often glanced over and misunderstood by his immediate public audience. The end of his July 26, 1988 entry is telling:

We had a long discussion trying to figure out Japanese understanding of American culture, particularly me. Through trying to answer their questions about my situation in the past and present in Japan, I came to explain how I felt I was losing my naive confidence in the Japanese understanding of (or capacity for understanding) my work. I had always felt that the things people responded to in my work were tied to their own traditions of the "sign" and the gesture and the concept of the "spirit of the line" that is so evident in sumi painting and calligraphy. I thought people here were more receptive to my work than Westerners because they understood it and felt it more clearly and deeply. The proliferation of all the imitations has taken away some of my confidence. The things that are copied are usually redrawn and therefore the whole "power" of the line is lost. This is very distressing to me since I believe the very essence of my work rests in this concept of the "gesture" and the "spirit of the line" to express individuality. The only thing that remains is the concept or the "cuteness" and the fashionable hype. I really wanted to believe that people here loved the work for the right reasons and that they were even more in touch with it than Europeans and Americans because they "felt" it and "read" it in this way. I still believe that this is the case, but only in the minority. The majority of people only know about my work from all the things they see on clothes and in magazines. This is not a bad thing, necessarily, but it is a fact. I mean, I am a new phenomenon that is neither "good" nor "bad" or "right" or "wrong." It just is what it is. My challenge now is to deal with this situation and try to go forward by continuing to work and define my position and my art. I believe that in time all things will become clear.
Newer Posts Older Posts Home
Subscribe to: Posts (Atom)