Why Japanese Monks Are Still Upset About A 1970's Animation 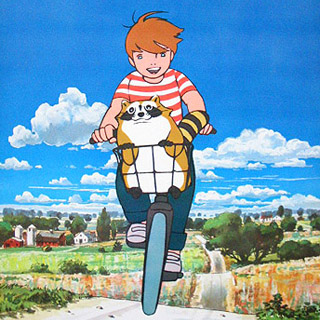 When I was a little kid my father baited a camera to take pictures of raccoons in our backyard. Later, we adopted an abandoned kit, and named it Loki because my mother had recently read Norse mythology to us. My father made a two-level cage for him with a chicken-wire enclosed base, and a log that lead up to a plywood hutch. Raccoons do not make good pets. They have long claws and sharp teeth, and they remain wild. I just finished watching the documentary Raccoon Nation about these creatures who work the night shift in our towns and cities. Their urban population is booming. Toronto is the raccoon capital of the world. Surprisingly, it turns out that the cosmopolitan raccoon only stakes out a three-block territory, and does not require a natural source of water. The documentary goes abroad to Kyoto and Kassel. In the 1970s Nippon Animation produced a cartoon called Rascal the Raccoon based on a children's novel by Sterling North. The viewers went gaga over it, and at the peak of the craze imported 1,500 kits a year from North America. As the kits matured and expressed their wild nature, the pet owners followed the storyline and released their raccoons into the woods near temples, which the raccoons have damaged at an alarming rate. Now 10,000 raccoons are captured and killed each year in Japan in a monk-approved plan to eradicate them and to save their 1,000-year-old places of worship. The situation is a little different in Germany where a pair of raccoons was introduced in the 1930s to amuse hunters. Now the population is out of control. Kassel has the biggest raccoon population in Europe with an average of 100 raccoons per square kilometer. A failed hunting solution turned the inhabitants to good-old German engineering to outwit these prowlers. Raccoons, however, like a challenge and our effort to thwart them increases their intelligence. Coincidentally, one North American interviewee in the documentary spoke of our assisting the creation of the über raccoon, while another compared their bodies to sumo wrestlers. They are not unlike humans; omnivores with good manual dexterity. The wildlife biologist, Stan Gehrt, who is featured in the film does not write them off.

I wouldn't put raccoons quite on our level, but they're trying to get there...They're catching up.

Selling One's Soul to the Art World for Five Grand 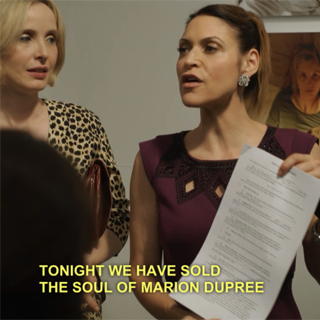 Julie Delpy (pictured here, left) is best known in America for the Before movies with Ethan Hawke: Before Sunrise, Before Sunset, and Before Midnight. I wonder if her sequel interest started when Krzysztof Kieślowski starred her in White of The Three Colors Trilogy two decades ago. Delpy wrote, directed, and starred in 2 Days in Paris, and 2 Days in New York. I watched the New York sequel last night, partly for her but mainly to see Chris Rock. Rock plays her boyfriend who endures a couple days' visit with her unbearable relatives and ex from France. Delpy's character is an artist who is trying to make a splash at the Susan Kellner Gallery where she has an opening that features pictures of her in bed with a range of men. Nothing sells until an earlier lie she tells that she is dying from a brain tumor spreads, and the entire show is compassionately bought. Before that happens Delpy sells her soul as a performance piece. She hopes it will go for at least $10,000 but Vincent Gallo is the highest bidder and gets it for $5,000. Delpy tries to get it back when she feels her life has come undone. In an off-screen moment she wrestles it from Gallo's groin (where he keeps it) but during their struggle he swallows it, and she returns soulless to a bewildered Rock.

The Documentaries of Werner Herzog: Lands of the Mind, a World of Ideas

by Drew Martin
I watched two documentaries by Werner Herzog this past weekend: Happy People – A Year in the Taiga, and Encounters at the End of the World. These films about the remote, frozen Russian wilderness, and Antarctica were not as deep as Caves of Forgotten Dreams, which is about the prehistorically painted Chauvet Cave in southern France, but still push past the commonplace into the profound. What the two films I just watched have in common is that Herzog had the inhabitants of these places to ask his questions, often from left field. In Caves, Herzog could only speculate what the early humans were thinking. Herzog’s view of nature is not through a National Geographic lens. It is more of a vision of humans, not in idealistic harmony with their surroundings, nor competing against it with Survivor tricks, but as characters defined by their environments in a humbling way.

Of course, with narrated introductory lines such as "We flew into the unknown, a seemingly endless void," he sets the stage for productions that force you to see things his way.

The National Science Foundation had invited me to Antarctica even though I left no doubt that I would not come up with another film about penguins. My questions about nature, I let them know, were different. I told them I kept wondering why is it that human beings put on masks or feathers to conceal their identity? And why do they saddle horses and feel the urge to chase the bad guy? And why is it the certain species of ants keep flocks of plant lice as slaves to milk them for droplets of sugar? I asked them why is it that a sophisticated animal like a chimp does not utilize inferior creatures? He could straddle a goat and ride off into the sunset. Despite my odd questions, I found myself landing on the ice runway at McMurdo.


Not to disappoint, penguins do make the final cut but only so Herzog can ask a biologist studying them if there are gay penguins and whether or not they ever go insane. This is followed by a scene of a wayward penguin who neither sets off to feed in the ocean nor returns to the colony. Instead, the lone penguin runs towards a predicted death in the interior of Antarctica.  With Herzog’s questions about deranged penguins, the fatal disorientation is played as not only suicide but as contempt for penguin society, not unlike a distaste Herzog often expresses about modern society. 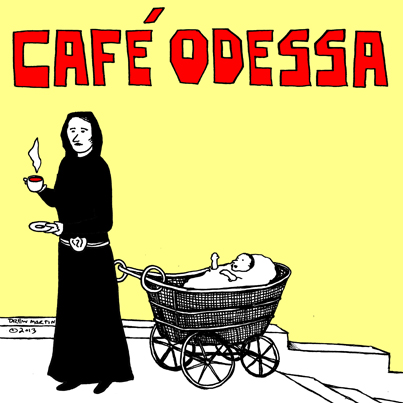 by Drew Martin
I awoke from a bizarre dream more than an hour ago, somewhere around 3 am. I was in a long American sedan, which an old lady was driving, and there were others in the car. We were going to a restaurant to discuss a project. I pointed out that the part of whichever city we were in was trying to resemble a quaint Czech town. The old, silver-haired lady navigated the old, silver Cadillac through the narrow streets. When we arrived at the venue, she drove the car through the front door of the restaurant, and pulled up alongside the table. After we got out, she folded the car like a card table and stored it outside on the street. There were some people waiting for us, who were already seated. She introduced them as other Americans. One man seemed familiar, but I thought he was Australian. He corrected me and refreshed my memory, telling me I recently did a drawing for an article he published in a political journal. I looked down at the table and saw the drawing, and others I had also done for the journal. I sat down and picked up the menu. The place was called Café Odessa. The menu was red and had a stylized symmetrical line drawing of a baby carriage. I thought it was clever and looked for the artist's name. I found the familiar signature of Jiří Slíva, one of my favorite illustrators who has a great collection of coffee-themed drawings titled Café Fetish. I thought it was strange that he would draw something so iconic. I could not sleep after waking up from the dream so I got up and drew this picture imagining how it might fit into his book.