Two Must-See Music Documentaries about Life and Death; One about a Band Called Death

by Drew Martin
I just watched two documentaries about music, life, and death. The first one was The Lady in Number 6: Music Saved My Life about Alice Herz-Sommer who died this February at the age of 110. She was the oldest Holocaust survivor, and at the age of 109, when the film was made, she was super lively and at the piano for hours each day in flat number 6 of her apartment building in London.

Herz was born in Prague in 1903 to a family acquainted to Gustav Mahler, and Franz Kafka, who used to visit her mother to discuss his writings, and would take young Alice and her sister for walks and tell them stories. She did not recall these stories but remembered his atmosphere. This was a big word for Herz, which she additionally used to encompass impression, character, and conditions. She said what you learn in school is important but the intellectual atmosphere of your parents is more important.

Herz became a concert pianist but when the Nazis invaded Prague they took away her grand piano, and after taking away her friends, family, and husband, she was sent to the Terezin concentration camp north of Prague at the age of 39 with her son. There she performed more than one hundred concerts for the others in the camp. A friend who endured the camp and witnessed the evening events said she played Chopin’s Études from memory. Herz said the concerts were not entertainment but rather moral support. She said ill and old people came to the concert and became young again.

A friend and cellist who survived Auschwitz by performing in an orchestra at the death camp explained that musicians were spared to play for the Nazis. The cellist said any officer could come into the music space at any time and request whatever he fancied. One day even Dr. Mengele stopped by and requested she play Träumerei by Schumann.

Herz lived for music, and referred to it as a dream. She called Beethoven a miracle, and twinkled with amazement when she talked about what is inside his melody. She said we should thank Bach, Beethoven, Brahms, Schubert, Schumann for giving us indescribable beauty. “They made us happy.” Apparently her son Raphael shared her sentiment. She said she found him at the age of three crying to a piece that he found beautiful.

I thought that following this short film about such a lovely person who survived such a horrible time, with a documentary about a punk band might feel disrespectful but A Band Called Death is just as special. I always think of skinny, pale, nasty guys as the creators of punk but before there were The Ramones (1974) or The Sex Pistols (1975), there was a proto-punk band called Death out of Detroit that was started by three African American brothers in 1971. Way ahead of their time, and totally experimental, Death rocked it.

The Hackney brothers grew up in a hustling Motown, and were turned on to all music by their father who told them to tune into what the Beatles were doing. They also absorbed The Who, Alice Cooper, Jimmy Hendrix, and Queen. Their first venture Rock Fire Funk Express was about trying to figure out their sound but they ended up playing Rock and Roll so hard that it became Punk. The mom let the brothers take over a room in the house to practice in but set strict playing hours: 3-6pm. The band was named Death by the oldest brother in the group after the father died in a car crash with a drunk driver while he was racing an injured trainee to the hospital. Using the name was to put a positive spin on death because the brother believed it was just like a birth, and the ultimate trip.

The film is about the rise and fall of the band, the death of the brother-leader, the music career of the surviving sibling members and then the reemergence of the band more than three decades later after their music was rediscovered.

Click here to watch the trailer for The Lady in Number 6: Music Saved My Life

Click here to watch the trailer for A Band Called Death

Surf and Turf: Dogtown and Z-Boys 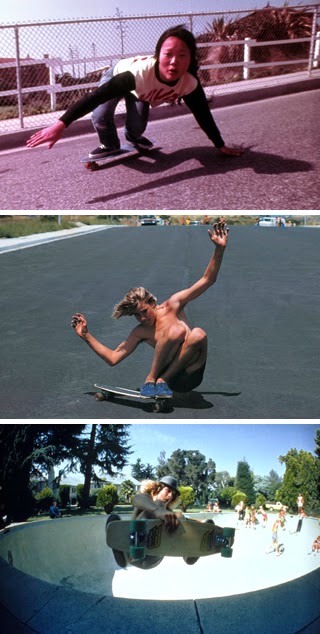 It seems like yesterday when I sat on the edge of a neighbor’s cool lawn on a hot summer day and watched the paper boys show off moves on the skateboards they bought with the money they earned from their routes. That was 1976. I was seven years old.

I have always been peripherally fascinated with surfing and skateboarding. I never surfed, and I only rode a skateboard for transportation at school in California. This morning I got my fix through the documentary Dogtown and Z-Boys from 2001. Dogtown is the Venice/Ocean Park neighborhood of Los Angeles where “the debris meets the sea.” Z is for the Zephyr skateboard team, which came out of the Zephyr surfboard shop where Jeff Ho not only radicalized the shapes of boards but also decorated them with a look he lifted from the local gang graffiti. This is where surfing got a gritty makeover, and where the skateboarding revolution started.

The locals defended their area around the collapsing piers by dropping chunks of concrete from the piers onto the intruders who dared to ride their waves. One local went so far as to pull the carburetor from a visitor’s car, paddled it out on the nose of his board and then asked the guy if it was his before dropping it into the Pacific Ocean.

The Zephyr kids surfed the large morning waves and then spent the afternoons practicing their surf moves on skateboards. They started on the hills by the shop and then moved on to asphalt burms around school playgrounds, which were move wavelike. When a tough drought in California made it impossible to maintain backyard pools, the Z-Boys did the skater version of skinny dipping: they jumped fences and skated in the empty pools without permission until the cops arrived; then they split.

The Z-Boys, which included Peggy Oki, top, where known for their low-riding form, and their best technical rider Tony Alva, bottom, introduced the aerial to vertical skating. Surfing was originally linear: you caught a wave on your longboard and rode it in. Likewise, early skateboarding competitions were mainly about slalom races. There were also freestyle events but these were done on flat-surfaces for people who could do tricks such as handstands. The Z-Boys discovered that the skating world was actually round, and you had to ride on the inside curve of it to understand that. When the Z-Boys saw the films of Hawaiian surfer Larry Bertlemann, with his low-gravity cutbacks, they took that to the pavement. They were especially fascinated with how Bertlemann touched the water with his hands, which they incorporated in their own style by constantly putting their hands on the concrete and asphalt when they did berts.

There is a big emphasis in the film about style, but not as something superficial. Style here is expressed as the surfacing of one’s personality. Someone with bad form was said to have cockroach style because there was something rotten about it, and ugly to look at.

Dogtown and Z-Boys works really well as a documentary about how skateboarding came out of the water and evolved on land but there is so much more to it. It is about how these ragtag kids from broken homes actively filled their unstructured time, humanized neglected urban spaces, and redefined surfaces beyond the imagination of city planners and architects. More importantly, it is about how a culture is created. The Venice part of Los Angeles was once a fancy amusement area for Angelinos. It fell apart, left a void, and got filled by an alternative surf and skate culture.

From a media point of view this is a brilliant story that started from within. The Z-Boys style was captured in photos, film, and writing by Craig Stecyk, one of the founders of the Zephyr shop and team. Many of the stills and much of the footage in the film is from Stecyk. He took what was originally considered a kid’s pastime, which was lumped in with hula-hooping and yo-yoing, and showed it as an extension of society and more importantly, gave it significance. Stecyk introduced skateboarding to the world as an art form. He cowrote Dogtown and Z-Boys with Stacy Peralta, who directed the film and was one of the original Zephyr skateboarders.

Pictured here, middle, is Jay Adams, who was the most natural and gifted rider of the group. He did not achieve the commercial success of his peers, in fact he ended up in jail. The others say he had a stream of conscious way of skating: he turned mistakes into new moves, and pushed what could be done on a board with wheels.

Click here to see a trailer for Dogtown and Z-Boys.

Schematic Cinematic: The Use of Drawing as Scheming in Film

by Drew Martin
I first took note of the use of drawing in films during an Italian cinema class that I took in the late Eighties. In one film there was a character who loses a ton of money in a stock exchange. The main characters observe him minutes later, nonchalantly drawing a flower on a napkin in an outdoor café. The scene held as much simple power for me as drawing itself.

Since this clip I have been really interested in how and why drawing is shown in films that are unrelated to the arts. Typically, it is a way to show thoughts, which are normally handled with voiceovers. A voiceover is much easier to pull off because it is direct, and can be tacked on in post-production. The typical drawing scene in a film has little concern for the act of drawing or whether or not the character enjoys the exercise. Its purpose is to show a unique visual cue about the thinking of the character.

Two drawing scenes that I recently noted in shows/films were in House of Cards, and There Will Be Blood. In House of Cards, Kevin Spacey’s character sketches a potent bull while listening to the President of the United States practice a speech. Spacey, as Vice President, explains there are two types of Vice Presidents: doormats and matadors. He proves to be the latter. In There Will Be Blood, Daniel Day-Lewis’ character, an oilman in the early 1900’s, studies an etching of an oil-drilling rig and sketches his own derrick. It is not as direct an assault as the bull, but it is just as scheming because it is the machine behind his ruthless deals, cut-throat pragmatism, and godless approach to life.

What is most interesting about these scenes is that they show something unique to humans. I have read that one difference between Neanderthals and humans is that the former never created art. For that matter, humans have the most developed capacity to extensively plot a future move over a long stretch of time. These cinematic examples couple drawing and scheming, and show how a determined person can dominate his or her environment.