A Year in Review: The Museum of Peripheral Art in 2013 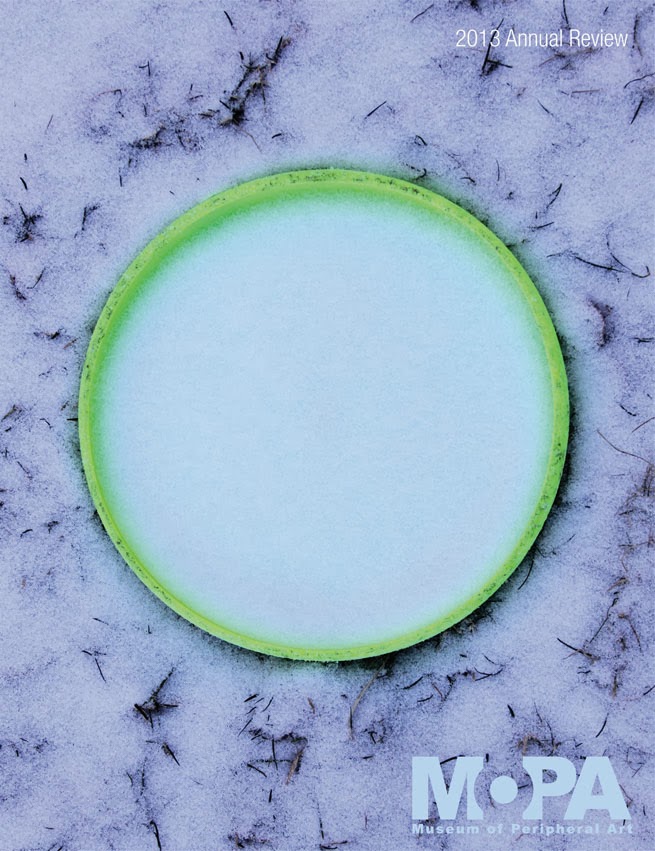 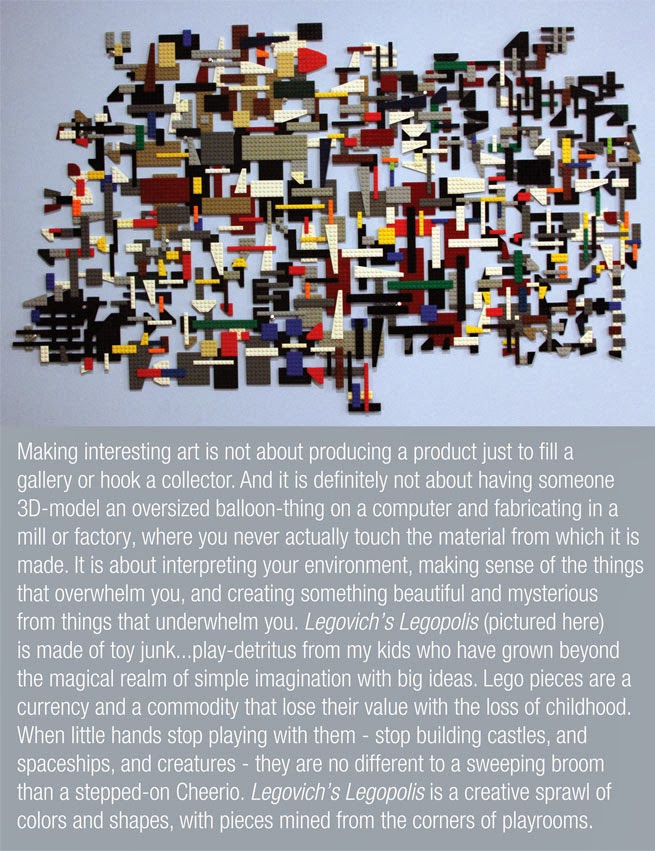 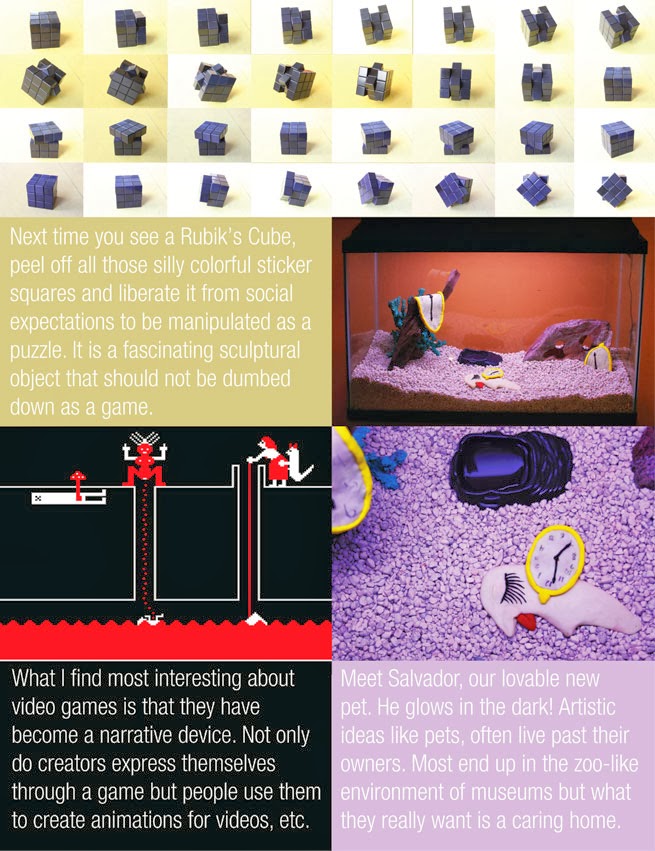 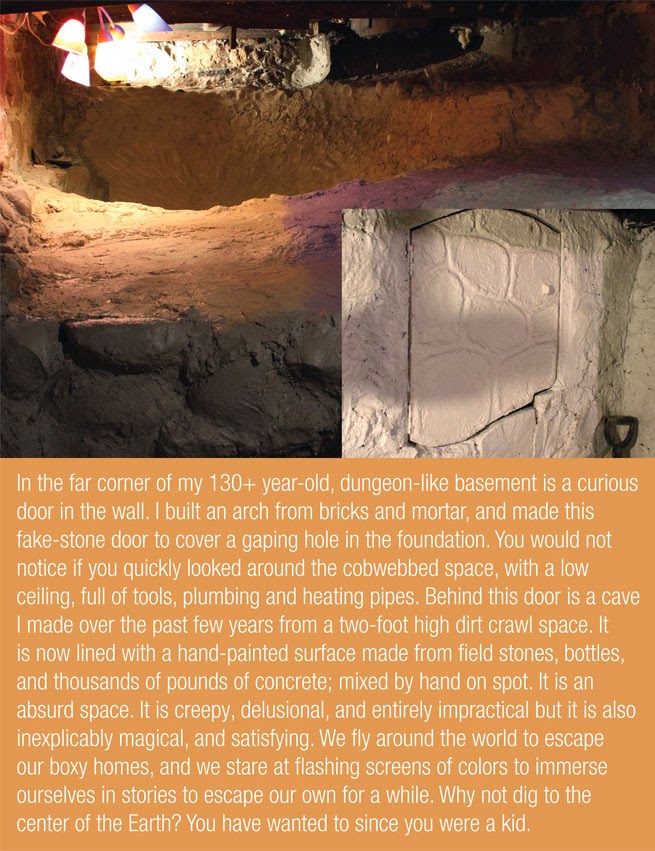 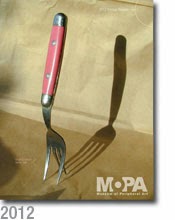 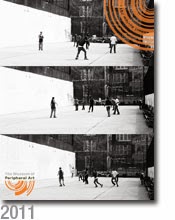 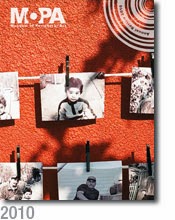 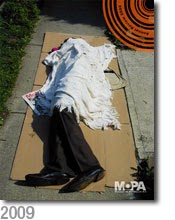 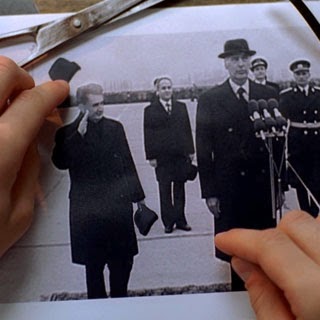 by Drew Martin
If you like Photoshop mishaps and disasters but cannot remember a time before this image enhancement program was part of our lives at work and daily media consumption, then take a look at The Legend of the Party Photographer, one of six well-crafted short films that comprise Tales from the Golden Era.

Set in 1980s communist Romania, The Legend of the Party Photographer is about the old-school retouching of a black and white film print in order to make Romanian tyrant Nicolae Ceausescu taller than the visiting French president Valéry Giscard d’Estaing. The party editors also want to add a hat to Ceausecu's bare head because they think it looks like he is saluting d'Estaing. In a hurried retouch without paying heed to the young photographer who wants to finish the picture, the image is whisked away and printed with a mistake that causes panic and a total recall.

Tales from the Golden Era is a brilliant film from 2009 that captures the absurdities and setting of this lost time and place behind the iron curtain, but it does so with such intelligence and wit that the director Cristian Mungiu serves us a very watchable film. 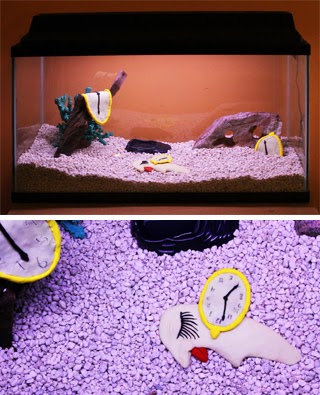 by Drew Martin
The pets that have the best chance in our chaotic household are the ones that could basically survive without us. Our cat is doing well because we feed and love him, but with a water problem in the basement and a constant supply of fresh mice, he could actually live a long life without ever stepping outside.

I knew we were in trouble years ago when a neighbor gave us a big aquarium. Many fish later, and a brief phase with hermit crabs, the aquarium became a lonely place; until today. The aquarium belongs to my middle kid, my older son, Calder. This morning I was doing an art project with my youngest son. He diligently made Angry Birds with colorful sticks of Sculpey and I made the soft, fleshy creature from Salvador Dalí's Persistence of Memory using glow-in-the-dark Sculpey. Now, we only have to think of a name for him.

by Drew Martin
I was in midtown Manhattan on Friday, only a couple blocks from MoMA, so I thought I would stop by in the evening on my way home. I wanted to pick up some presents at their design store and I also want to take a picture of a David Hockney work in situ. I never found the Hockney I was looking for but that did not matter, MoMA was abuzz and dreamlike that evening. I took some B-roll anyway for a project I am thinking about, and upon review I really liked the footage so I decided to stitch the clips together and make a summary of my wandering through the galleries:

Last night I had a dream that I attended a small-venue Katy Perry concert in New York City and was able to work my way up to the stage. The concert was a little edgy, which I thought was an artistic apology for the release of Prism; a schlocky let-down after her creative and crafty Teenage Dream. I awoke after the fourth song, and in my groggy transition I wondered if the pictures I took at the dream concert somehow made it back into reality. The funny thing is that even though the dream felt so real, there were dead-giveaway clues:

1. My 73-year-old mom opened for Katy with a lengthy performance.

2. One of my friends who fell asleep at the concert became two-dimensional.

3. My camera was a small, hollow box made from a thin wire frame stretched with golden fabric.

While Saltz mentions Bound 2 has been "ridiculed as clueless kitsch," I could not help to think of how it not only reminds me of the informed kitsch playfully handled by the Czech band Kill the Dandies in their video Everybody Calls Me an Angel but also how it makes use of wacky musical fragments. The difference is between soft pornography and surreal eroticism: West rides a topless Kim Kardashian on his motorcycle, Hank Manchini rides La Petite Sonja on a stuffed wild boar while he bites at an oversized mushroom.

The Czech video came out a few years ago - I am thinking that maybe West smuggled some of Manchini's kitsch-inducing mushroom back in his luggage after shooting his Diamonds From Sierra Leone video on the streets of Prague at that time. 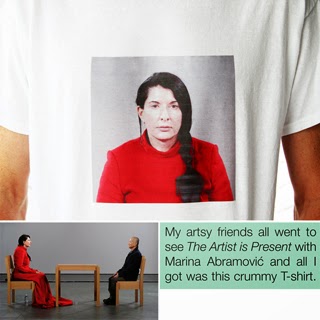 On my recent Thanksgiving trip to Richmond, Virginia, I thought it would be wise to check my family of five into a hotel instead of invading my brother's house, where he lives with his family of five and was hosting my visiting parents. I got two connected rooms in a nice hotel with a beautiful view of the James River, but the space still felt impersonal so I came up with an art project to change the experience. I liked the idea of using the iron in the room because the simple domestic act of pressing clothes always makes me feel at home. Downtown Richmond is dead after business hours/during holidays but there was an open Rite Aid nearby, which is where I bought some white T-shirts. On the drive down I started thinking that such a project might develop so we made a stop at a road-side Staples for a pack of iron-transfer sheets. I used the hotel wi-fi to Google the images I wanted and tried to print them at the business center in the lobby but they only had a black-ink printer, so I asked my niece to print them in color.

When it all came together I had a one-of-a-kind Marina Abramović shirt. On the front is a picture of Abramović from The Artist is Present performance in which she sat still and silent, and stared at the faces of visitors, who sat across from her, one at a time. Abramović performed seven and a half hours a day for three months at MoMA.

I typically do not like symbols or faces on my shirts but I liked the idea of Abramović from this performance because it meant that I could sit at a table with someone and if I proved boring, he or she could just stare at my knock-off shirt for a knock-off performance. I also like what Abramović's title The Artist is Present meant to this small art project done to fill the void of what is missing in a hotel room. On the back of the shirt is a picture of Abramović and an exhibit visitor, and the text,

My artsy friends all went to see The Artist is Present with Marina Abramović and all I got was this crummy T-shirt.